Understanding the System Curve for Your Pump, Part 3 Understanding the System Curve for Your Pump, Part 3

In the previous blogs, we showed how to generate a pipeline system curve of a system with one supply and one destination. We also talked about how to achieve a different flow rate through the system through changing the shape of the system curve or the pump curve. This method works for a system consisting of a single source of fluid, single pump, and single destination.

However, it quickly becomes much more difficult to show this graphically when multiple destination tanks are added.

In this article, we will discover how to balance the system by performing an energy balance of the system.

The Difficulties of Generating a System Curve With Multiple Destinations

In this example, we will look at a system with one source of fluid, one pump, and two destination tanks. The system in Figure 1 shows a single pump feeding a common header supplying fluid to two destinations. In order to develop a pipeline resistance curve, there are two destinations for the fluid to go. By attempting to calculate the system resistance by fixing the flow rate through the pump to a set value, we cannot perform a direct calculation because with two unconstrained flow rates in the paths we have a hydraulic network. Here is a system with multiple destinations at different tank elevations, levels, and pressures.

The only way in which we to develop a system curve is to:

In Figure 2 above, the resulting system resistance cure consisting of the combined static head and combined dynamic head. The intersection of pump and system curve is a balanced flow rate.

Unlike the resistance curve for a system with only one destination pipe, we are not able to determine the flow rate through each path, because the flow can go down either path. The system resistance curve with multiple paths will show us the total flow through the pump but not through each branch. This is because of the two paths available for the fluid to flow. If any changes are made to the system (valve position, tank level, or pressure), then we will need to create a new system curve. Also, the difference between the pump curve and the resistance curve does not represent the differential pressure across the control valves like is common in the single circuit curve developed in section 2.

For example in the example in Figure 1 let’s assume we would like to fix the flow rate through the system to 600 gpm with each control valve set to 300 gpm. Figure 3 shows the result of this system based on measured flow rates and pressures. Using the manufacturers supplied pump curve one can easily determine the total head produced by the pump, in this example the pump produces 152.7 ft of head at 600 gpm. One thing to remember, the pump does not know or care what the flow rate down each path is, but it will always produce 152.7 ft of head when 600 gpm is passing through the pump. Like with any energy balance the energy consumed by both head loss due to friction and energy to meet the static head must be equal.

For example, we will tabulate the results of the head for each element in the system, and compare it to the total head developed by the pump. In this example, the pump head is a positive number and the head loss in the pipelines and control valves assumes a negative value.

Each element in the system is entered on the tabulation and the results are added. The zero in the sum row shows that the branch is balanced.

The liquid level in the system’s supply tank is 5 ft of head, and the supply tank is common to both paths. The head losses through the pipelines, and control valves are listed based on the flow rates specified by the control valves. In addition the static head of each tank is determined based on the tank levels and pressures. This system was simulated using the PIPE-FLO program, but this information could have just as easily been read off system meters and gages.

Path shows that the supply tank provides a head of 5 ft, based on the liquid level in the tank. With a total flow rate of 600 gpm through the common supply line we need to subtract the pipeline head loss of 1.17 ft. Reading off the pump curve for 600 gpm we can determine the pump will produce 157.2 ft of head. The common pipeline 2 with 600 gpm has a head loss of 4.68 ft. This gets us to the junction where the two flows diverge. Path 1 has a flow rate of 300 gpm which is set by the control valve 1. Next we have the head loss associated across the control valve that value is 18.82 ft of losses, and the Tank 1 has a static head of 128.1 ft. Looking at the Head in Path 1 graph you can see the fluid energy of 157.2 ft added by the pump equals the losses for path 1 and the static head at tank 1.

Performing the same balance for path 2 one can easily see the energy supplied by the pump equals the energy consumed by the fluid in path 2 due to pipeline friction loss, differential pressure across the control valve, and static head of tank 2.

In a typical piping system, there usually isn’t the luxury of a highly instrumented system with calibrated flow meters and pressure gages. Given the boundary conditions in this system, the set flow rate at the control valves, and the knowledge of the pipe lengths and sizes, we can easily perform an energy balance and determine the differential pressure across the control valves.

In this example let’s use the energy balance to calculate the differential pressure across each control valve when 200 gpm is going through path 1, 400 gpm in path 2.

The energy balanced with the same system with the head loss with different flow rates down the paths.

Performing the calculations for each path we can determine the differential pressure across each control valves.

Since the fluid is water at 60 F is the fluid density of 62.25 lb /ft3 for this, the head loss can be converted to dp as follows:

Mixing It Up With Different Tank Pressures, Levels, and Flow Rates

The total flow rate through the system will be reduced to 500 gpm with valve 1 set to 200 gpm and valve 2 set for 300 gpm. Table 3 shows the results using the energy balance. In this table, we work the way through the system one pipe at a time, but the head loss across each control valves is calculated by taking the pump head, subtracting the dynamic head losses, along with the static head with the results being the dp across the control valve being at the bottom of the list.

The results of the System Energy Balance with varying tank levels, pressures, and flow rates.

The calculated results using the PIPE-FLO Program are displayed in Figure 4 below.  Notice the how the results of the energy balance agree with the simulated system operation. Applying this Approach to any Process System

This approach can be applied to a process system of any size in which branching occurs and the flow rate in each branch is set using the following method:

This method can be set up using a spreadsheet like Excel® and will provide results that you would be unable to get from just a system curve.

As demonstrated in the figures, PIPE-FLO performs these calculations and displays the results on the FLO-Sheet, providing a more intuitive interface for interpreting the results and their significance on the piping network.

PIPE-FLO: All You Need To KNO

PIPE-FLO is the engineering standard for Modeling & Simulation Calculations to manage your entire fluid system lifecycle. From design to digital twin simulations, our software is proven to save time and money.
Schedule a demo with us today. FLO Master Academy: All You Need Why Pump Cavitation Matters In Your 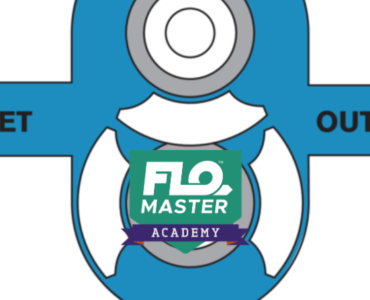 Modeling a Positive Displacement Pump With